Rare Beauty Calendars is an Arizonan publication, as such, we love exposing our fans both old and new to the many hidden Gems Arizona has to offer, like Fossil Creek Waterfalls! While the Mainstream Media and Social Media exploits Arizona for the beauty that Havasu Falls provides; we thought it would be nice to show a little more of Arizona that's not on every tourist's destination list.

This upcoming Rare Beauty Calendars 2018 Edition will soon be released in 2017. We thought it would be great to release a small teaser from our day at Fossil Creek Waterfalls before releasing the printed Edition. Above is a short video featuring Rare Beauty models; Holly, Mayra and Jordyn. Photography provided by RB Branded and sponsored by Estetica Cosmetic & Reconstructive Surgery and Vizion Couture.

While Havasu Falls is surely beautiful, here are a few reasons to visit Fossil Creek Waterfalls.

I have been wanting to visit Havasu Falls for some time. As the waters are said to be a crystal clear blue green and the sheer height make it a grand destination. However, after years of attempting to gain Havasu Falls' permits I have yet to be successful. I originally discovered Havasu Falls many years before Facebook and various other productions. Since discovering the destination I have probably called the 1-800 number hundreds of times with no luck on getting through, except once when they told me all the passes were soldout in 2016. When I inevitably tried again in 2017 I was shocked to learn that the costs had been raised, due to the popularity of the Falls. Not only were the prices raised but the reservation procedures were changed as well. Where as before you could book your reservation and then be expected to have the fees the day of the reservation, now you must cover the full cost immediately at the time of booking. This meant that your chances of picking up a reservation due to a cancellation is now slim to none.

The process to get in to Havasu Falls is lengthy and exhausting and I have yet to be successful in my pursuit. However, the fees to Fossil Creek Waterfalls is cheap, priced only at $10. The $10 is for your vehicle parking in which they have several lots for you to reserve a spot. The parking lots are various distances to the Falls, so you'll want to book your party in advance as the walk from the last parking lot to the falls is a few miles and not the most fun of a walk, especially after a long day of playing in the water and Sun.

Driving from Phoenix to Fossil Creek Waterfalls is only a few hours journey up the I-17 and then over towards Strawberry. Once you reach the entrance of Fossil Creek Waterfalls you'll be met by the first set of Park Rangers. From there, you will travel 14 miles on rough roads. You will want to make sure you travel in a vehicle that has high ground clearance as the road is not a simple gravel road. The average speed you'll travel on this road will be about 15 MPH so it will take you nearly an hour to get from the first Park Rangers station (which is really 2 Rangers standing next to their truck.) to the second gate that is the final checkpoint before reaching the parking lots of Fossil Creek Waterfalls. You'll be happy to know that they just recently built nice bathroom facilities at both the Park Rangers check-in as well as each designated parking lot.

We did see a few cars travel down to Fossil Creek Waterfalls but the condition of the vehicles once they left could be questionable as there are large rocks constantly hammering your vehicle's undercarriage on the 14 mile road. As you prepare your trip you'll want to know that the gates to get in to the parking lots close at 4 PM to enter. If driving on dirt roads make you nervous you'll want to plan on leaving Fossil Creek Waterfalls while there is at least an hours worth of daylight in order to make the 14 mile journey back to civilization.

There are several parking lots at Fossil Creek Waterfalls that vary in distance from the Falls, so you'll want to try and get the Waterfall Parking Lot. I have been to the Falls on three separate occasions, I have had both the best parking lot permit and the worst. The furthest away parking lot will tack on several more miles to the hike. The hike once you get to the trail is rather scenic but the hike from the car to the trail head is quite agonizing as it is just a straight walk in the Sun for several miles.

Once you reach the trail head you duck under an old gate and begin to climb a gradual inclining hill. A half mile up, or so, you turn to the left and hit a much narrower trail to Fossil Creek Waterfalls. Immediately after stepping onto the narrower trail you are greeted by a downhill section as well as receive cover from a canopy of trees, if it's a hot day in July, you'll love the shade the trees offer! From the start of the trail to the waterfall destination, the hike is rather enjoyable and quick. There are a few places along the path where you'll need to navigate through spots consumed with large boulders and rocks.

While you hike you'll see plenty of nature! You'll see lizards scurrying across the path, may see some small bores or pigs as well. Above head you'll see several large Hawks and Eagles. Once you arrive at the river you'll be excited to see schools of smaller fish.

The largest waterfall is definitely breathtaking. The water much like Havasu Falls can be described as crystal clear with a beautiful blue-green color to it. While the waterfall may not have the height of Havasu Falls it definitely has the awe factor as it is very wide across and is powerfully fast running! As you spend the day there you'll get to witness several people climb up the side and jump off the top of the falls. As I noticed, you'll want to leap as far off the side as you can, aiming for the darkest part of the water. There are several signs warning of the dangers and if the jumper doesn't leap far enough there is a chance of great harm caused by the sharp rocks awaiting at the bottom.

I personally have not jumped off the falls but as you may have seen in the video above, Rare Beauty Jordyn was brave enough to jump off, not once but twice. She described it as exhilarating but found herself a bit cold after being fully submerged in the water. (Mostly because the waterfall is well shaded, shielded by the neighboring mountains.)

All in all I would greatly recommend adding Fossil Creek Waterfalls to your destination list or bucket list! The price to get in and out is very reasonable. The hike is not unbearable or too great of a length and the views are one-of-a-kind! 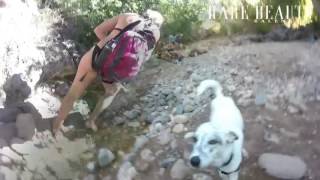